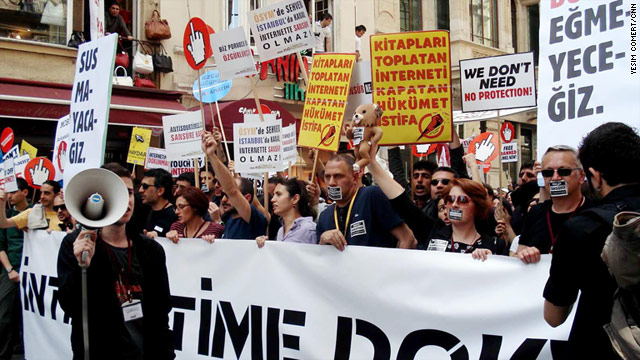 You can download a formatted and footnoted PDF version from here

The objective of each annual IGF programme is to maximize the opportunity for open and inclusive dialogue and the exchange of idea; to build capacities amongst all stakeholders and benefit from the multi-stakeholder perspective of the IGF. The 2003 WSIS Geneva Declaration on Principles reaffirms “as an essential foundation of the Information Society, and as outlined in Article 19 of the Universal Declaration of Human Rights, that everyone has the right to freedom of opinion and expression; that this right includes freedom to hold opinions without interference and to seek, receive and impart information and ideas through any media and regardless of frontiers”.

The Ninth Annual Internet Governance Forum (“IGF”) Meeting will be held in Istanbul, Turkey on 2-5 September 2014. Let us briefly explain why we decided to boycott IGF.

Between May 2007 and July 2014 Turkey blocked access to approximately 48.000 websites subject to its controversial Internet Law No 5651 which allows for blocking access to websites with the goal of protecting children from harmful content.

Although, the Law aimed to protect children from harmful content, from the very beginning it has been used to prevent adults’ access to information. In February 2014, amendments made to Law No 5651 extended blocking provisions to include URL-based blocking of Internet content which also allegedly include violation of personal rights or privacy infringements. The same amendments compelled all ISPs to be part of an Association for Access Providers to centrally enforce blocking orders within 4 hours of receipt and introduced one-to-two-year data retention requirements for hosting companies in addition to all ISPs. Furthermore, subject to new provisions, ISPs are required to take all necessary measures to block access to alternative access means such as proxy websites and other circumvention services including possibly VPN services. The amended version of the Law 5651 also shield the Telecommunications Communication Presidency (TIB) staff from prosecution if they commit crimes during the exercise of their duties within TIB.

Since the introduction of the controversial amendments access to both Twitter and YouTube has been blocked in March 2014 arbitrarily and unlawfully by the Telecommunications Communication Presidency as confirmed by the recent decisions of the Turkish Constitutional Court. With both blocking orders the government aimed to prevent the circulation of graft allegations of 17 December 2013 before the local elections to be held on 30 March 2014. During the blocking period, the authorities also ordered major ISPs to hijack Google and OpenDNS’s DNS servers tampering with the DNS system to surveil communications as well as to prevent users to circumvent the blocking orders. The Constitutional Court stated that the blocking of Twitter by TIB constituted a grave intervention on the freedom of expression of all Twitter users. Furthermore, the Constitutional Court in a 14-2 majority judgment decided that the YouTube ban was unconstitutional and infringed on the applicants freedom of expression protected by the Constitution.

However, despite these strong decisions Twitter decided to implement its Country Withheld Content Policy for Turkey and started to block access to certain Turkish Twitter accounts as well as individual tweets. It was reported in June 2014 that Twitter complied with 44 out of 51 court decisions since they visited Ankara on 14 April 2014 and the US based social media platform continues to aid and assist Turkish authorities to censor political content from Turkey.

Facebook also banned pages of a number of alternative news sources on its social media platform, including Yüksekova Haber (Yuksekova News), Ötekilerin Postası (The Others’ Post), Yeni Özgür Politika (New Free Policy), Kürdi Müzik (Kurdish Music), and other related groups on Kurdish movements during 2013 and has been critized for removing several pages related to the Peace and Democracy Party (BDP). Regardless of the above mentioned Constitutional Court decisions, currently, access to popular platforms such as Scribd, Last.fm, Metacafe, and Soundcloud is blocked from Turkey. Access to WordPress, DailyMotion, Vimeo and Google+ has ben blocked temporarily by court or administrative orders during the last year. A number of alternative news websites that report news on Kurdish issues remain indefinitely blocked from Turkey including Firat News, Azadiya Welat, Dengemed and Keditor. In total it is estimated that 200 websites are banned indefinitely for their pro-Kurdish or left wing publications. The practice of banning the future publication of entire websites goes beyond “any notion of ‘necessary’ restraint in a democratic society and, instead, amounts to censorship”.

Over the past year, many users received suspended sentences and fines for their social media activity, usually on charges related to terrorism, blasphemy, or criticism of the state and its officials. In September 2013, during a retrial at the 19th Istanbul Criminal Court of Peace, pianist and composer Fazil Say was given a suspended sentence of 10 months and court supervision for insulting religious values in a series of tweets.

Subsequent to Gezi Park protests of June 2013 dozens of people were detained for their social media posts in the ensuing crackdown. Criminal investigations and prosecutions were initiated subject to Articles 214 and 217 of the Turkish Criminal Code concerning incitement to commit a crime and disobey the law as well as with regards to miscellaneous provisions of Law No 2911 on Meetings and Demonstrations. However, such criminal investigations and prosecutions “do a disservice to democracy and often even endanger it” creating a chilling effect on all social media platform users. On the contrary, “the dominant position which the Government occupies makes it necessary for it to display restraint in resorting to criminal proceedings, particularly where other means are available for replying to the unjustified attacks and criticisms of its adversaries or the media”. No such restraing has been displayed by the government authorities since Gezi.

In addition to widespread blocking of websites and content as well as criminal investigations and prosecutions to silence political speech, the Turkish authorities are also building surveillance infrastructure including the deployment of deep packet inspection systems to monitor all forms of communications unlawfully.

Therefore, we decided to boycott IGF 2014 hosted by Ministry of Transport, Maritime and Communications and coordinated by the Information and Technologies Authority. We also confirm that we will not be taking part in the IGF.

Be the first to comment on "IGF Boycott Statement"